Los Angeles Metropolitan Airport opened in 1928 and was spread over 80 acres amid the trees and farmland.

In 1929, Hollywood discovered the airport. Howard Hughes, Hoot Gibson, Cecil B. DeMille, Gene Autry and Wallace Beery were among the growing number of stars flying at the new airport. The airport continued to expand and grow with three factories, six hangers, and a control tower on airport grounds. The airport also began hosting air races. During one such race in 1929, Amelia Earhart set a new speed record. Roscoe Turner’s beloved Sikorsky S-29-A met it’s demise near VNY while being filmed for Howard Hughes’ epic “Hells Angels”. 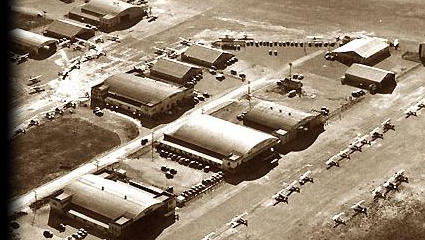 In the 30’s, Hollywood studio producers turned to Metropolitan Airport for their film location needs. “Lost Horizon,” “Men With Wings,” and “Test Pilot” all have scenes filmed at the airport. Within a few years, the original builders of the airport went broke, and the airport passed into the hands of a woman named Drusilla Daily Warner in payment for a debt. Warner’s grandson, Dean Daily, inherited the airport after her death. The little airport with the 3,000 foot runway became home to stunt pilots in biplanes. One of them was aviatrix Pancho Barnes, who years later became den mother to the record-breaking jet pilots at Edwards Air Force Base.

In the 40’s, with the attack on Pearl Harbor, things changed dramatically. The Army acquired 163 acres of airport property and the government purchased an additional 163 acres near the airport to construct what became known as Van Nuys Army Air Field. In 1944, a joint effort between the U.S. Navy and the Lockheed Aircraft Corp produced a large aircraft modification facility known as the Navy-Lockheed plant. Meanwhile, Hollywood continued to use the airport for filming, most notably when scenes for “Casablanca” were shot at the airport. After the war, the government took over the property giving Dean Daily 50 acres of land and $200,000 in settlements.

In 1949, the city of Los Angeles purchased the airport from the War Assets Administration for a token payment of one dollar, with the condition that it remain the home of the California Air National Guard until 1985. The airport was renamed San Fernando Valley Airport. At one point in the late ’40s, it was envisioned as a base for Air Force fighter/interceptor planes to defend against a feared attack by Soviet-piloted bombers from Siberia.

To provide the space needed for early jet fighters, a runway was extended an additional 2,000 feet south from Saticoy Street to Vanowen Street. To avoid blocking busy Sherman Way, the street was routed into a tunnel under the runway, which is still in use today. But, by the time hundreds of homes had been razed and the expansion completed, the defense role was taken over by Nike anti-aircraft missiles, leaving the airport with an extraordinarily long (8,000 ft!) runway for a general aviation field, an unintended legacy of the Cold War.

In 1957, the airport was christened “Van Nuys Airport”. The first annual Aviation Expo was held sometime back in the 60’s. In 1964, the airport began offering free guided tours to the community. In 1968, a 27-hole golf course was completed in the “clear zone” on airport property. In 1971, airport records show a total of 562,079 operations, making Van Nuys Airport the busiest general aviation airport in the nation.

A 1992 economic impact study indicates some 8,700 jobs were created by Van Nuys Airport activities with an annual payroll of $200 million. The airport has had an annual economis impact of nearly $1 billion on the Los Angeles region, paying more then $24 million in tax payments to local political jurisdictions. To this day the Van Nuys Airport remains the busiest general aviation airport in the world and the seventh busiest airport in the United States.